Hiding my nodejs application code within a docker container 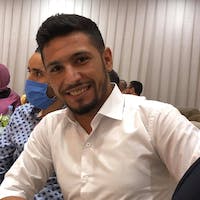 Building binaries on compiled languages like Rust and Go as Static or dynamic linking makes a huge step on code security, I mean no one can access your code, reading it !, but in many use cases they can by doing some complicated reverse engineering methods ... actually it's hard! it becomes harder when you built your app as a static linking and bundle all the shit 💩 together. Nodejs applications can be read it easily ... all your source code is accessible, In this post, we will hide our node app and "COMPILE" it! seems awesome right! let's go folks 😇 !

Make sure you have Git installed!

make sure you have docker installed, otherwise install mongo directly.

On the mongo uri we have the ip of the mongo container, you can use localhost:27017 instead, but we need the IP when we run the app inside the container.

You can run it with node app.js

Using curl with POST request to send data inside the products.json. the jq command is just for formatting JSON.

Simple GET request to get all requested data

Why we need a binary

This approach! i mean building binary can save us especially to get rid of the node_modules inside our container! we will save space and enhance the image size! besides we don't need any base node image like FROM node: latest because it's just a binary that needs a shell to run, also you have to make a choice of your build platform or architecture, you can find the full list of the available architectures for nexe on this link full list.

In this tutorial, we need a minimal docker image ... like 5MB of size ! , that's awesome ! yes, it's is the alpine image, the smallest one! now we can deploy a docker image with a low size! it will be extremely fast believe me, if you have a small server with limited os storage or an on-premise docker registry with limited storage it will be wonderful to store images with small size !!

If you try to build the project with nexe and then use it on a docker container based on alpine, it will work !, only in your dreams 🤣. To be able to run it on alpine we need to set the right architecture platform before the build.

In terms of security, you are almost secure they can't get to your source code! it's a binary! dude, but they can access your container if they succeeded to create shell access with the RCE (remote code execution) attack ... they can do it by attacking your application and exploit it, so they are on your container now! they can't read your code but they can crash your container and access your host and here is the disaster 😳 ! so I will try to limit the privileges on the container by disabling the root access and create a non-root user and remove some of the default Linux commands like ls, cat and mv 😈.

In order to build the binary, we need a special package called nexe with over then 9k stars on GitHub 🧐 !!

To install it run this command npm install -g nexe and check the package version nexe -v, I have the 4.0.0-beta.16 version.

To build the application just run this command! :

In some cases you need to bundle some HTML files to your binary or any some directories, you can do that by adding the --recursive/-r option and specify the path like this :

And here we go! it's much like a command! try to move it to another location on your file system and run it again! awesome it works smoothly, congrats! you have a standalone binary for your node app 😍 !

Move it to docker

let's run the app with docker, we need a dockerfile to build the image, here is an example:

We will base the container on a lightweight docker image: Alpine it's about 5MB in size! then we define our working directory /app to be the default directory for the rest of all commands and when you access the container via exec. Adding a non-root user called btx without a password and remove some of the basic Linux commands like ls , cat , mv , find and cd. Now no need to copy the whole project 🥲, just that tiny binary! and that's it. We know that the app depends on a .env file so we copy it inside the container.

Exposing the container port is dependent on the port number on the .env file. Now all artifacts are in the right place, so now let's change the directory ownership to the btx user and activate that user to be the default one when we access the container via exec. The final command is to start the app as a single process on the container.

We can now test the app and start inserting data and getting them via curl via localhost:3000

To ensure more security test try to use :

You build it, you run it, you secure it